Music to encourage piano playing again after a disabling stroke 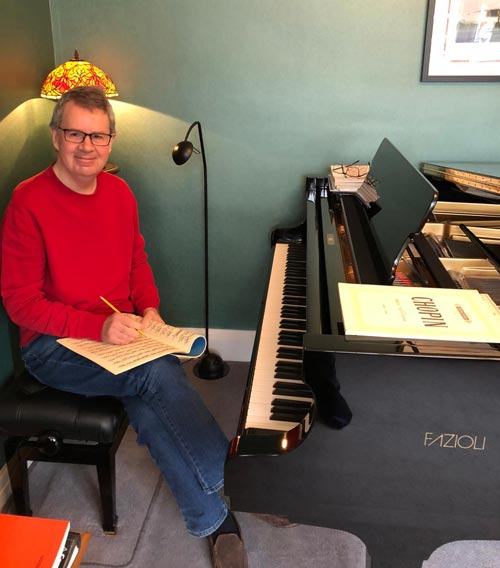 My name is Peter and I live in the UK. I am a keen classical pianist and I have adapted some Bach music so that it can be played by someone with the use of only one hand.

My motivation was to try and encourage a good friend of mine to play the piano again after experiencing a severe stroke.

I attach an article written by the Stroke Association UK about this music project.  The article has since been picked up and printed in newspapers in my local area in North East London, and in my friend’s local area in Norfolk.

As the article states, I have prepared two separate books of Bach music – for left hand piano, and right hand piano. Copies are now available to anyone who would like one, on request, with the sincere hope that it perhaps might help others in a similar situation. They are currently free of charge but this may change, depending on the level of response.

If you have any questions or would like any additional information, please don’t hesitate to get in touch.

Peter Jones, 65, from London has been inspired to reimagine some of his favourite classical pieces that can be played one handed, after his friend from Norfolk suffered a stroke.

Peter Ellis, 60, from Norfolk, is the inspiration behind the project and was a keen pianist before a stroke in 2018 meant he was unable to move his left hand side. Despite months of hospital rehabilitation, which has helped Peter move more freely again, he is now unable to carry on the hobbies he used to love such as playing the piano.

After hearing of his friend’s stroke and the effect this has had on his ability to play the piano, Mr Jones began adding annotations to famous works by Johann Sebastian Bach, specifically some of his solo violin pieces, so that they can be played using either the left or right hand.

Peter (Jones) said: “I wanted to encourage people like my friend Peter, who have experienced a stroke and used to love playing the piano to start playing again and I really hope it can help them in their recovery.
“The beauty of this particular Bach music is it is so complete that it can be played with one hand. It doesn’t need the other hand for harmony. I have therefore put in the notations and fingerings for the right hand, and also for the left hand in a separate book.”

Stroke survivor Peter is finding going back to playing the piano to be an emotional experience.
Peter said: “I was in a sorry state after my stroke – emotionally, physically and spiritually. I felt totally exposed and vulnerable and couldn’t even do regular tasks, let alone hobbies like gardening and playing the piano.
“When Peter mentioned what he was sending me, the thought of going back to play the piano was amazing. I am still trying to get my single handed playing in place, it’s rather like going back to the beginning and taking lessons again.
“Playing the piano again stirs up real emotions for me when I had been given no hope that I would ever be able to play again.”

Peter (Jones) is now looking to release copies of the music for the left hand and the right hand that will be given to stroke survivors free of charge.

The music is available by post on request. You can send your details, stating which book you require (either for right or left hand) to Peter Jones at
barnabaspandc@gmail.com

For more information and support contact the Stroke Association at www.stroke.org.uk/

For more information, contact: Ken Scott PR and Media Officer at the Stroke Association at ken.scott@stroke.org.uk or phone 0115 7788429

About the Stroke Association